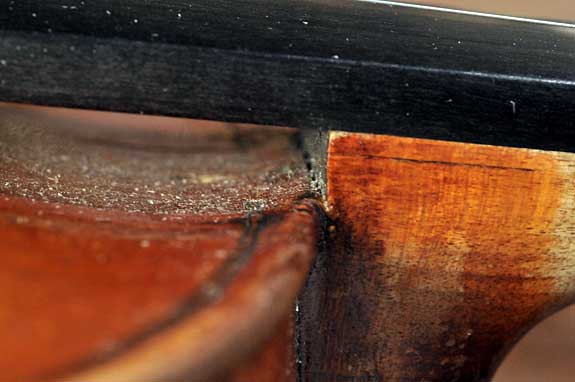 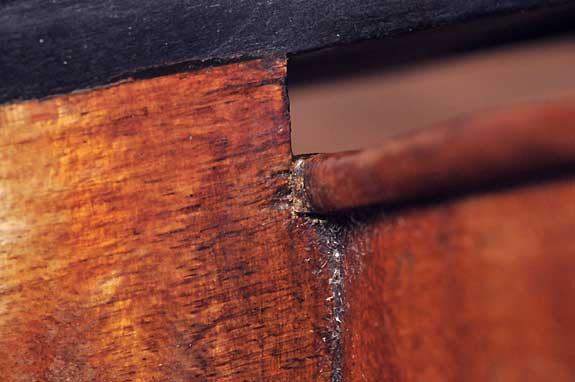 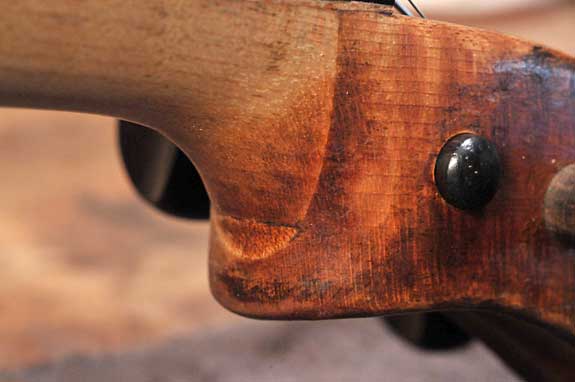 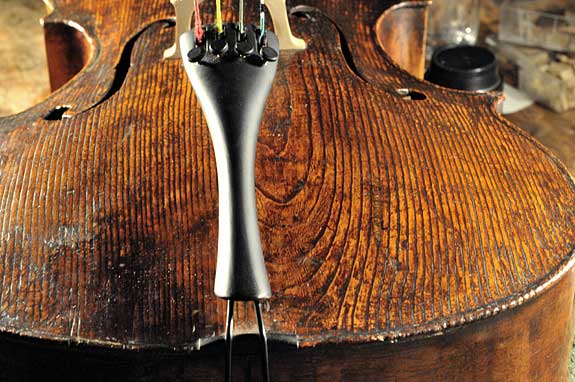 Modern makers think they need the very best wood, with particular grain widths, specific gravity, ideal species, from the right side of the mountain cut at the right time by the right person saying the right incantations.

This ¾-size cello is from around 1780, and it sounds great. Go figure.

I have quite a few shots of varnish texture in my collection. This very attractive example is on a Gand & Bernardel violin from the 1860s. 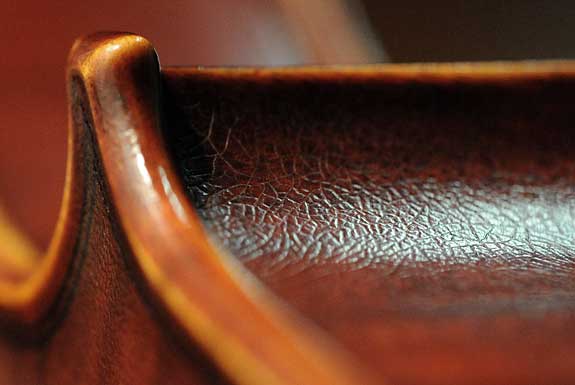 Sometimes texture only shows in protected or low spots, like the location above. This particular violin had it all over–here’s another shot: 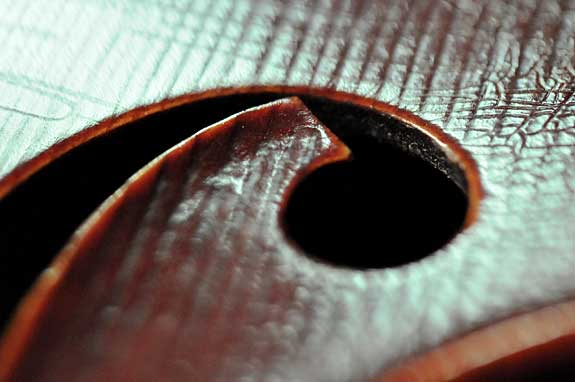 I’ve seen maple curls that were painted on, but how about some stamped-on antiquing? 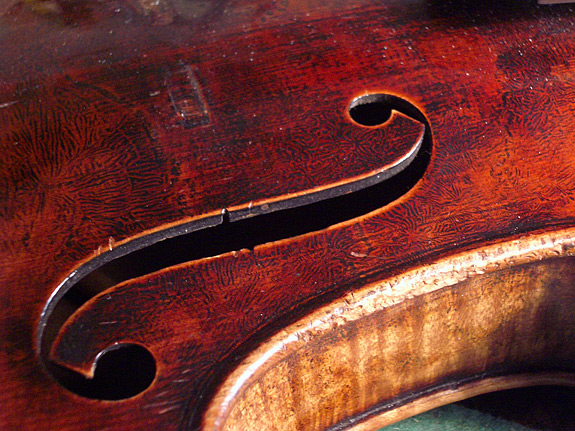 A violin, bought as a fake, with this obviously fraudulent label. The violin looks like it’s from the same town that the label indicates, but it certainly isn’t as old as the label says:

Notice how the label isn’t glued in all that well, though. It’s in the wrong place, near the center of the back, looks hastily slapped on, and is a bit loose around the edges. What do we see when we take a look underneath? A signature of the real maker!

Somewhere along the line, someone thought they’d upgrade the violin, but contrary to their intention they downgraded it by turning it from a signed original into an obvious fake. The real maker is obscure, but he’s a known maker, and now the violin is real again, with the real maker’s name attached. That’s a solid upgrade.

Some labels are better than others! 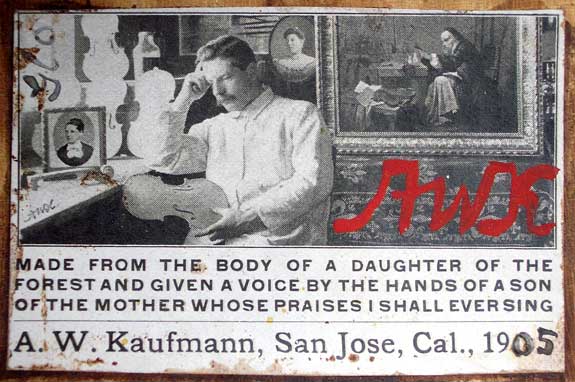 There’s a tool in Stradivari’s collection of tools that’s designed to prick depth marks to be used in the graduation of the plates. It looks somewhat like the sketch above, which is a drawing of the device I made for use in my own shop.

It is used to punch holes to a depth that leaves unpunched the desired graduation thickness. Usually Stradivari removed all of the marks it made on the inside, but not always, as you can see on the inside of this unusually-well-preserved Stradivari top: 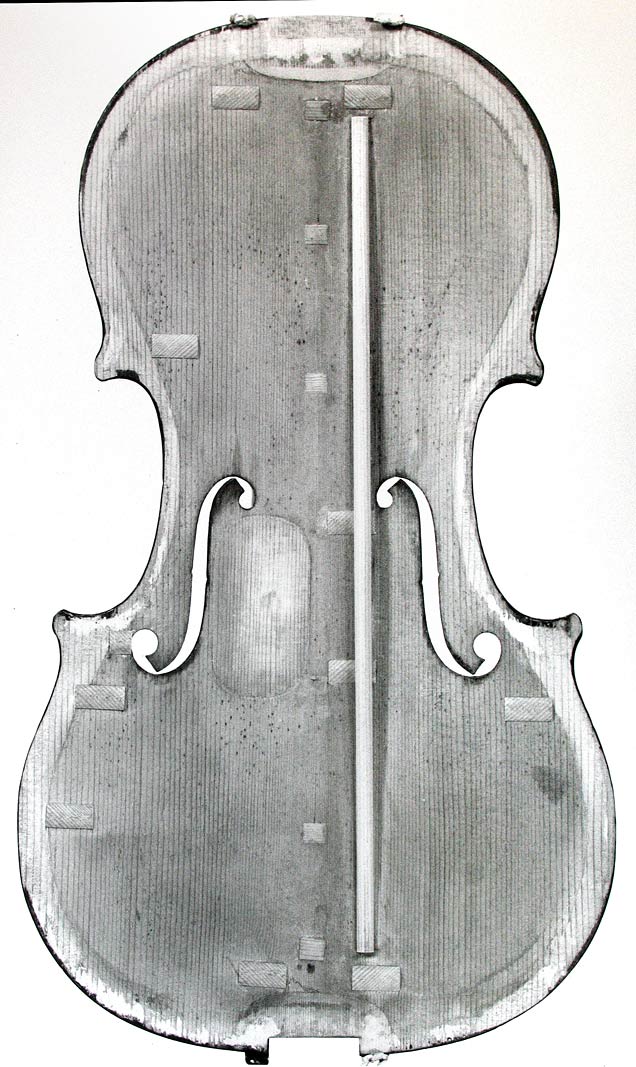 In softer wood or if the punch point had to go through too much wood, the anvil on the other side (outside) could leave dents in the surface. These can be steamed or scraped out, but once in a while they’re visible.

This cello back has them all over, and these aren’t the only ones I’ve seen on Strads: 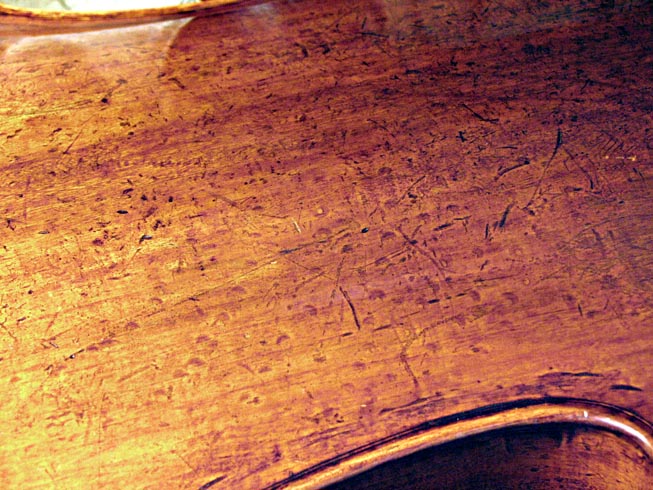 Notice, also, that the arching on this cellos is so full at the edges that there are clamp “smiles” all around the c-bout just inside the purfling where the clamps used by some later repairman to glue the back on bit into the rising arch.

Here’s a close shot of a couple of the punch dimples: 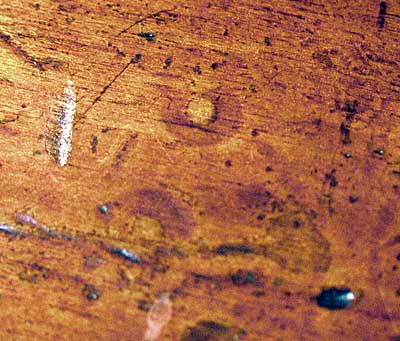 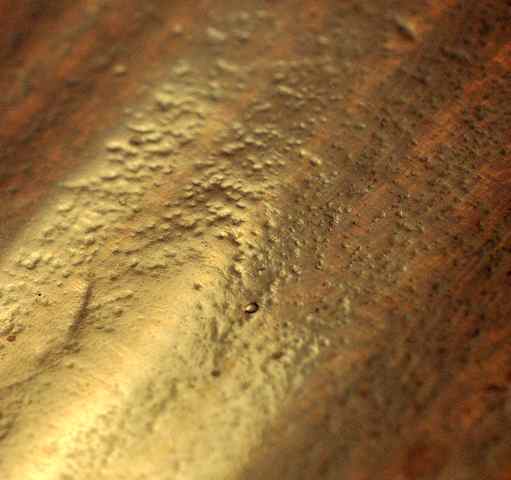 Old violins often have pinholes in the varnish. No one knows exactly how they got there, but they imply some things about how makers 300 years ago varnished, and what was important to them (pinholes obviously didn’t bother them much). This probably wouldn’t happen if the wood under the varnish was too well sealed, except we can see that sealer is there and that it has prevented the varnish from going into the wood, and pinholes aren’t compatible with that. It’s one of those little mysteries.