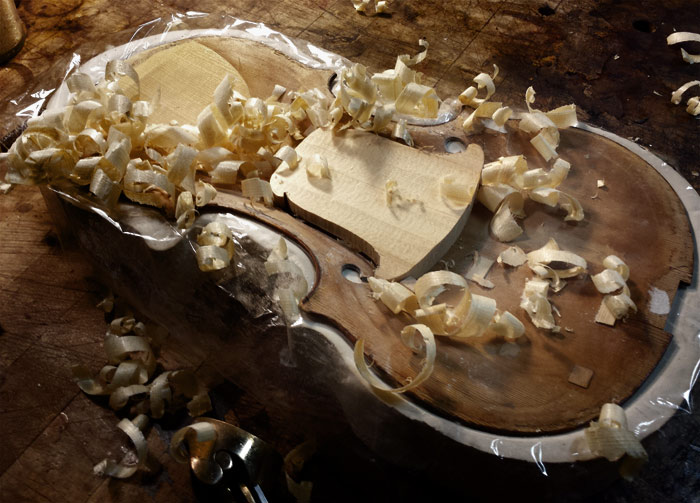 Sometimes a violin’s arching is vulnerably flat, perhaps the wood is weak, or thin, or a combination of those, and the center under the bridge starts to collapse. Often this is accompanied by the top puffing up under the board and the tailpiece, towards the ends. In such a situation, the arching is first corrected back to the way it originally was made, and then often some sort of reinforcement is put in. On this violin from the mid 1700s the collapse had caused a crack, and there were several other problems.

The first step here was to make a plaster mold (cast), then reshape the mold through several generations of corrections of the mold and the top. Then when the arch was back to a proper shape, I put in a very thin patch to hold the arching in place. That’s the patch in the center that’s being thinned in this photo. In this case, the upper area around the top block needed correction and reinforcement, and you can see the finished patch in place there, up towards the neck area. The final thickness of these two patches was only around 0.5mm–just enough to do the job!