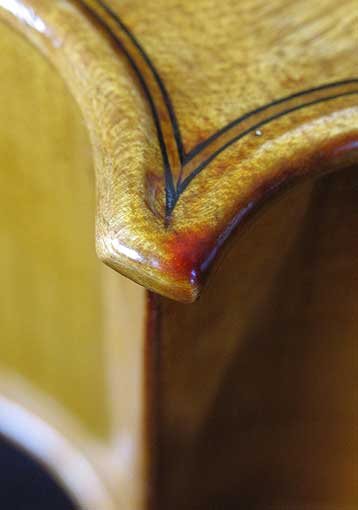 Supposedly, dragon’s blood resin is the result of a fight to the death between a dragon and an elephant. The elephant has wrapped his trunk around the dragon, the dragon entangles himself with the elephant, they fall and crush each other, and both die.

Violin makers have a fondness for dragon’s blood resin as a colorant. It’s a striking red-to-orange color that some French makers used, and writers of the 1800s thought was the source of Cremonese varnish’s red.

It has a problem, though: as it ages, it bleaches out. I’ve seen several instruments with the problem shown in the photo: only the very thickest spots of varnish, such as that drip of varnish hanging on at the end of this corner, retain their red color for very long. What’s left when the red disappears is a sickly green. The cello in the photo is only about 30 years old. I once watched one instrument, a different one and new, turn from a beautiful and vibrant orange to entirely light green over a period of about seven years.

Likewise, many French violins from the 1800s are a similarly unpleasant green color, but under the fingerboard where light doesn’t reach and in the thick varnish in the inside corners of the underedges they retain some of the original red.