This violin is not even 100 years old, even though it looks 300. It came to me with several open cracks on the top, and as soon as I glued one, the stress of closing that gap opened up another. The toasty-brown color and the smell show that the wood was treated with nitric acid to darken it, and the result of this is that the structural strength of the wood has been seriously compromised. 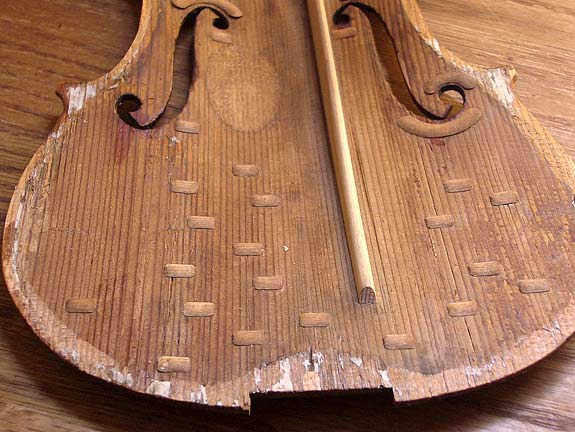 For over 100 years, treating wood with nitric acid to make it look old was a common practice of some French makers. Usually the results aren’t this severe, but I did once work on a cello that’s exactly as old as I am, but in much worse condition.

Violin lore says that J.B. Vuillaume ruined some of his instruments by baking them. I’ve never seen a Vuillaume I thought was baked, but have seen several I thought had been treated with nitric acid, which has a definitely-different look from baking. It makes sense that this would have been what he did, since the idea of using nitric acid to darken wood probably came from bow makers, who still it to darken pernambuco without any undesirable effects.